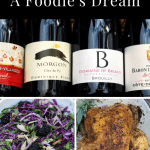 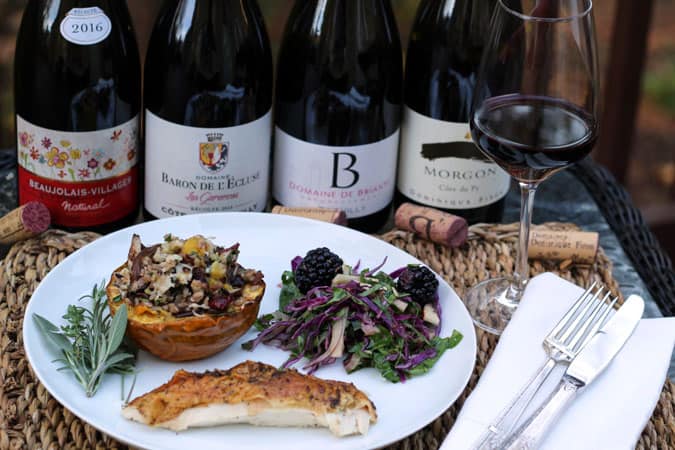 When it comes to food friendly-wine, look no further than Beaujolais. Beaujolais is made from the Gamay grape, a variety that produces wines low in tannins, with bright acidity, and fruity and floral aromas. Beaujolais comes in a range of different styles that can influence a food pairing.

In France, there are three categories of Beaujolais:

Beaujolais – This is the region’s largest appellation, covering 24 square miles and over 72 villages. The soil is made up of sandstone, limestone and volcanic rock.  The vines grow on flatter land. This results in wines that are lighter and less concentrated. 50% of the production is made into Beaujolais Nouveau. Beaujolais Nouveau is a young wine released 6-8 weeks after harvesting. It is fermented using carbonic maceration resulting in wines that are fruitier with little detectable tannin and low acidity. They are meant to be consumed within six months of their release.  Beaujolais Nouveau is released on the third Thursday of November and is often part of the Thanksgiving table pairing nicely with the turkey and cranberry sauce. It is a simple wine, meant to drink not sip, creating a perfect match for bbq chicken wings, chips, and dip.

Beaujolais-Villages – This is the region’s second largest appellation, covering 18 square miles and 38 villages. The soils are granite and sandy. The vines grow on hillier slopes. Beaujolais-Villages wines are a better quality than the basic Beaujolais wines.  They tend to be smoother, more balanced, and display more structured minerality. The wines are popular in French bistros serving burgers, roast chicken, pork, charcuterie and the like.

Beaujolais Crus – The remaining 25% of Beaujolais production is Beaujolais Cru. There are ten distinguished Crus (villages).  Brouilly, Chénas, Chiroubles, Côte de Brouilly, Fleurie, Juliana’s, Morgon, Moulin-À-Vent, Réginié, and Saint-Amour. The Cru name will appear on the bottle often with the producer name, but not “Beaujolais.”  The vines grow on steep granite hills. The Crus can vary depending on the soil composition from a lighter bodied and floral Saint-Amour or Fleurie to a fuller bodied and more concentrated Moulin à Vent or Morgon. Beaujolais Crus are generally made in the traditional winemaking method similar to a Pinot Noir. Pairings are driven by the weight of the wine, lighter bodied wines pair well with poultry or even a meaty fish like tuna.  The fuller bodied wines match well with beef or hearty stews. 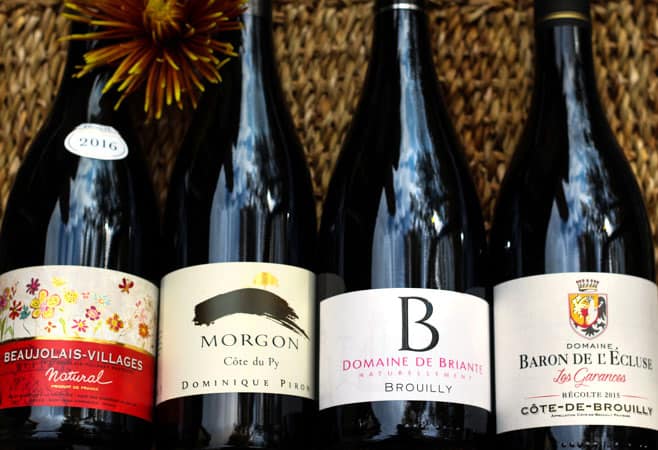 This month the French #Winophiles are taking a closer look at wines from Beaujolais. Join our conversation on Twitter Saturday, November 18 at 11 ET. And check out my fellow #winophile’s blog posts below.
Disclosure: The wines were provided as samples; all opinions are my own.

2016 Beaujolais-Villages Natural, Terra Vitis
12% ABV $12 SRP
Light ruby in color with a crimson hue. Notes of raspberry on the nose. On the palate, bright acidity, light bodied with notes of violet and raspberry.

Beaujolais wine is a foodie’s dream.  Low tannins, bright acidity, and little oak, make for a wine that pairs with most foods.  Because of the range of style from light bodied and fruity to fuller bodied and more complex the food pairing choices are vast.

I started with a cheese board.  All three cheeses worked well with all the Beaujolais wines bringing out the fruity characteristics in the wine. 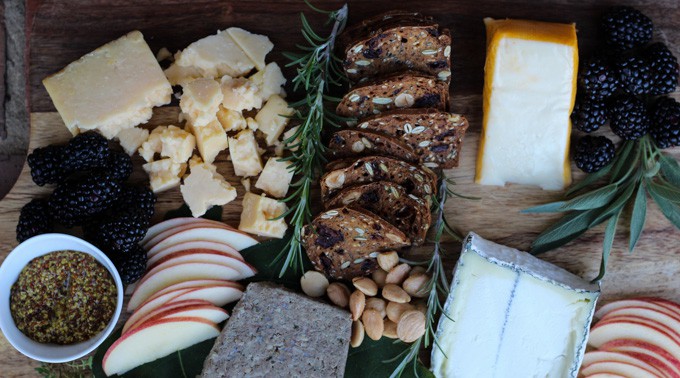 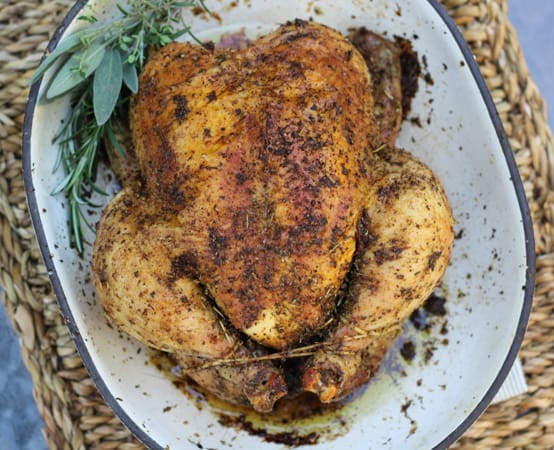 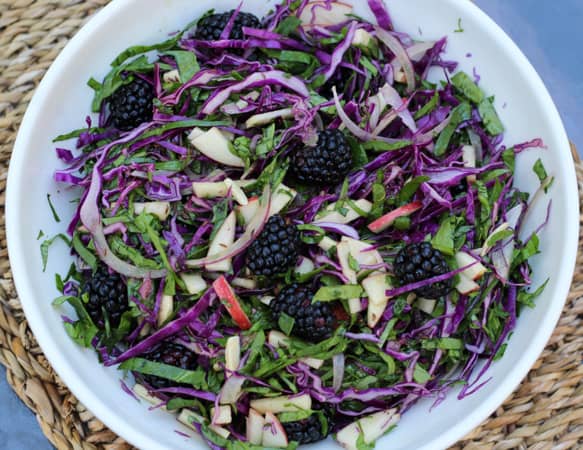 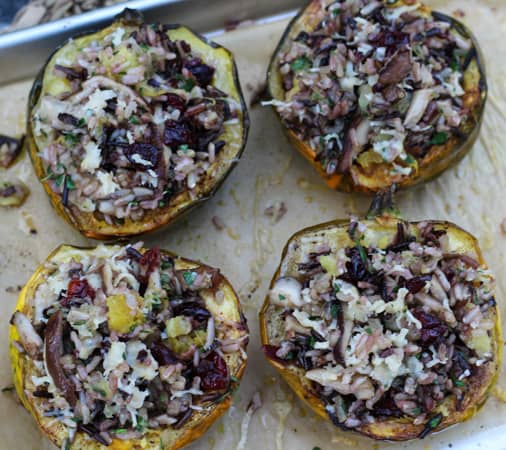 My dinner was a bistro-style meal that matched the wines perfectly.  A simple roasted chicken,  a classic with Beaujolais. The Red Cabbage Blackberry Caraway Slaw played to the textures and fruit in the wines. The Roasted Stuffed Acorn Squash brought out the earthy notes in the wines. It is no wonder that Beaujolais finds its way to the Thanksgiving table with all the Fall flavors. My Thanksgiving will definitely include the red cabbage blackberry caraway slaw with bottles of Beaujolais! 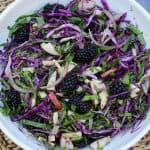 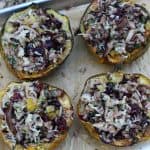 A Roundup of the French #Winophile’s posts on Beaujolais

This website uses cookies to improve your experience while you navigate through the website. Out of these, the cookies that are categorized as necessary are stored on your browser as they are essential for the working of basic functionalities of the website. We also use third-party cookies that help us analyze and understand how you use this website. These cookies will be stored in your browser only with your consent. You also have the option to opt-out of these cookies. But opting out of some of these cookies may affect your browsing experience.
Necessary Always Enabled
Necessary cookies are absolutely essential for the website to function properly. This category only includes cookies that ensures basic functionalities and security features of the website. These cookies do not store any personal information.
Non-necessary
Any cookies that may not be particularly necessary for the website to function and is used specifically to collect user personal data via analytics, ads, other embedded contents are termed as non-necessary cookies. It is mandatory to procure user consent prior to running these cookies on your website.
SAVE & ACCEPT
150 shares